What? You clicked on this website? Well, good decision. Here’s a new facegraphic, that ist pretty much finished and that I uploaded only unfinished in social media, congrats. 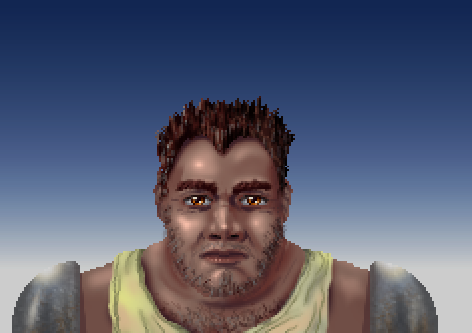 Don’t worry, he’s one of the good guys – after you defeated him

[notice: if anyone is even interested in english posts, please give me a hint ^^]

apparently some of you at least downloaded my demo. Now hopefully you also play it and most importantly let me have a look on your reactions(in a written way ^^).
The german community has already criticized the demo at length and I’ve implemented some stuff to react to that and now also updated the current version on this site.
So this version includes the following improvments:

1. the damage trigger was pretty much rebuilt. that means first that it’s based on a new and more balanced formula which is supposed to prevent that it changes from pretty damn slow to super fast from one to another enemy. the second change is, that it moves three ways now: left – right – left. In the other version it was only going left and if you weren’t quick enough you missed. This way you have some time to estimate the speed.
The monsters in the droon station are a bit slower now too.

2. The intro was pretty long. So I took the scissors and cut out some unneccessary parts which makes it at least about a minute shorter.

3. Melings cut scene artwork was overworked. Have a look:

4. the tutorials for the scale bombs, the bomb jump and the damage trigger are now also available in the tutorial section after you’ve seen it the first time.

5. the competencies needed to complete an ability are a little less senseless cause they also improve the status.

That’s it for now. Hope you have a peaceful and deep time.

The complete soundtrack is maybe more designed to be played in the background while doing something else.

I by the way got some good feedback on the demo. A few bugs were found too. But it’s actually almost bugfree. If you consider playing it and wanne be completely safe, then just have patience for a few more days till I throw out the next version.

The second demo is now available for download. Go check it out. The playtime is about 5-6 hours.
It was very hard to find enough testers, so if you find any more bugs, mail me.

As you may have noticed, I also changed some stuff on the homepage. Some menu points are now completely in english. And I added “Future of DEEP 8″, where I explain why I’m using toilet paper with little dinosaurs on it.

For you, now, it is time to FUCKIN PLAY THAT DEMO … and get fucked really hard from it.

Finally I’m releasing the trailer for the second demo! That means, yes, you’re guessing it, it’s just a really small step to the actual demo release.
Currently the betatest is still in progress and unfortunately there’s a lack of testers … I’d especially like to have a few native english speakers for the english version of the game.
So hopefully you help me get this going and we all will hold a fully working second demo in hands soon.

Woah? Just another Update? Yeah … but … wait? Why am I writing in english? Ah, I see, it’s about big money now? I wanna get famous among the english community? Nah, not really. But due to the fact that the upcoming demo will be in english or german, it makes sense, to post some english updates too. Maybe I’m gonna too all the updates in the future in english, I’m not sure yet.

I also recorded the video I posted last time again and this time in english.
So, have a look at that:

This is todays progress: I optimized the mod menu by adding the possibillity to change the mod type via arrow keys. You can also see while calling one mod type what you have equipped on the other ones, cool huh?