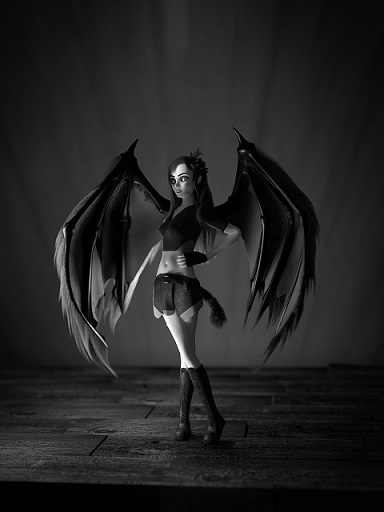 The planets of the DEEP 8 universe are populated by different races like for example the mighty Droons with their green martialness, the furry Dominators, also called Summoners and the normally peaceful, loving Dayigons, which are also the race, our protagonist Ramirez belongs to.

Ramirez might be the shyest individual, you could ever encounter who is also bothered by all these thoughts about women. He cannot help thinking about that but when it happens he always forces himself to stop, for some reason.
Aside from being a socially awkward boy, he’s a respectable fighter and reliable employee.

His female partner Meling however is not a very pleasant companion. She barely talks to him and when she does, she usually does it in an insulting or humiliating manner, which works counteractive to raising his confidence. Meling has long beautiful black hair, soft pale skin and a nice bosom. That at least is what Ramirez is thinking at some moments before  prohibiting himself to do so.

Aside from being a real fury, Meling wields a gigantic axe in battle, which enables her to crush any enemy she encounters.

Ramirez and Meling work for the emperor Vagnus from Antia, which is a big city on planet Lisarya, mostly populated by Dayigons.

For some weeks now, the people have been very anxious, because they seem to face an enormous threat. They even have to fear the extinction of their race.
The Droons, always known for martial behaviour seem to have set their mind to committing genocide on the Dayigons. They use a weapon called Pluz-Cannon to vaporize several planets and raid others with ground forces. Now they are planning on destroying Lisarya with one big bang as well, but they ran out of the rare mineral Pluz, which fuels their cannon. As soon as they find a new source for it, they will fill their cannon with it and blow up Lisarya within an instant. Millions of Dayigons would turn to dust in seconds.The Dayigons are a race of lower technological standards and they are facing a superior power. But not matter how hopeless the situation might be, they can not give in. They try to think of some kind of defence plan against the Droons. For that purpose the unlikely duo Ramirez and Meling are sent to an abandoned base of the Droons, where they are searching for weapons and other useful stuff.

With constant tension between them, many awkward situations and in danger of being extinguished at any given second, the story begins.