it’s been a while since I posted anything publicly. Also I pretty much abandoned the DEEP 8 twitter account. This is because right now I’m honestly not worried about publicity. I never really started developing this game for other people or to be sold, but rather for myself. And this is what I’m gonna do. Yet, eventually of course people may play it and I would highly appreciate that, too. For now I will stick with posting Dev logs now and then, in case I make any significant progress. Which I did over the last 2-3 months.

Actually I got a chart to give you an idea to where we are right now.

So the pink area is the content of the demo+the forest planet, which I played publicly in the playthrough stream.
The green area is what I worked on in the devstreams over the course of the year and what I created in the last 2-3 months. This is a big chunk of easily 2-3 hours of playtime.

If things continue to go this well, then I really might be able to complete the game over the course of the next 2 years. Especially since a lot of hurdles are now out of the way and development will be less cyclic.

The new content contains maybe THE most important scene or at least turning point of the story. Of course I don’t wanna spoil on that, but what I can show is some other material.

The WienerWorm, that has been developed in one of the last dev streams will attack you in the desert areas around the city of Tectum de Musca. Most of his attacks have to do with cacti. This one’s rather tricky, but think twice about what you do next.

Also don’t leave him on low HP for long. 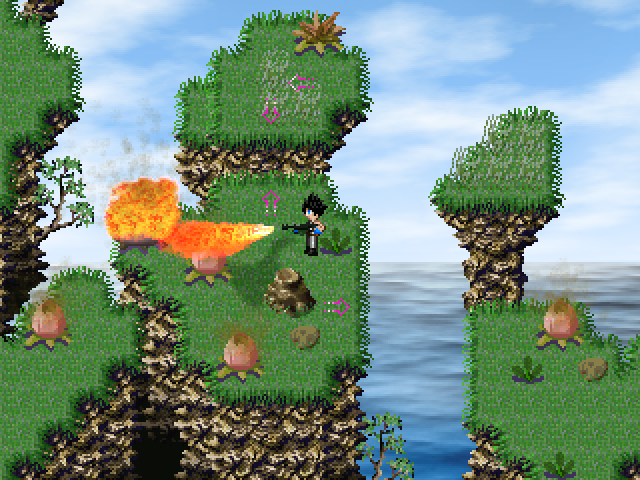 This is the Clivus Bridge. A bridge consisting of fragile rock towers. So there’s a lot of jumping going on in this area. Also it is infested with plants that puff out toxic pollen, which is why you first have to get a flamethrower and that is actually a pretty tricky and weird task.

That’s it for now.

PS: I tend to post more stuff on the DEEP 8 discord: https://discord.gg/7FKFnZR